We hear winter has arrived back in the North so stay warm, safe and secure!
This morning was a bit of a lazy start comparatively speaking, with a session of kickboxing and power yoga on the roof, followed by an amazing breakfast of hashbrowns and cheesy scrambled eggs cooked by the phenomenal “giantess” (a nickname given to Amanda by one of our clients in Seguin) and Tyra “the fit one”.

We then headed out to a number of bookstores in search of creole learning materials and a couple of other items… of course we found them in the last store we visited (ironic eh? lol… Seriously it took 4 stores to get them). We then went shopping in the largest grocery store in Haiti, which has 5 armed guards in the entry way to prevent “lesser class” from entering. Amanda asked if we were even in Haiti anymore, as it was so different from everything else we have experienced while being here. But that’s Petionville for you.

We then popped into the Haitian version of a fast food restaurant to pass a little time before going over to visit Michael and St Joseph’s School for Boys.

It’s amazing how fast the place has changed even since last year. It was great to see all the success and development.

We had to deliver some donations from another group who had been there over the summer – which of course were gratefully accepted. 🙂

We headed off to the Iron Market to let Tyra and Amanda see the art market… to a certain extent it was a bit overwhelming… and very hot. We all became a bit delirious with dehydration. Anyway we became an instant hit, as we bought a fair amount in order to be able to hold another auction next year.

and as a mini-celebration for the creole books had blackened fish for dinner, along with a mango-pepper salsa. Now we need to shower… being downtown has us all feeling disgustingly dirty…
as the smog is quite thick. 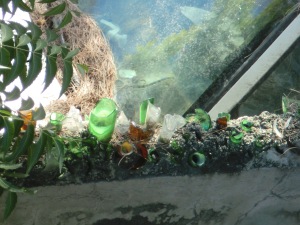 So now we are just having a political discussion… attempting to solve all of the problems of the world. The internet has been very slow. So we haven’t been able to upload any photos. Hopefully tomorrow…

Each year we need to raise a minimum of $15,000 per trip to pay for interpreters, guides, in-country travel expenses, medicine and supplies. More than 90% of monies raised are spent within the country of destination for workshops and clinics.