Early start today as we left at 7am to head out to the live animal market (which is only held on Fridays). Since today was a day off for most people (as it is All Saint’s Day) the roads were pretty quiet comparatively speaking. Along the way we passed the tent city which now looks completely different as there are many wooden shelters that have replaced them. 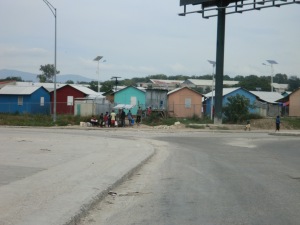 Amazing what happens over a year!

Once at the animal market we explained the process from animal purchase to slaughter to dehairing to dismemberment. The market too looks different from last year, with walls and concrete partitioning between sections.

People can go to this market both for food (poultry, fish, ruminants, pigs, rabbits), as well as to buy work animals (horses, mules, oxen) or for growers (cattle, sheep, goats, pigs) or for companion animals (cats, birds). As always no one wanted us to take photos there as they are afraid of the PR repercussions.
After wandering around watching for awhile, we clambered back into the good old taptap and headed towards the desert and Haiti’s biggest lake.

This is where the fish fry from the production farms are taken to grow. It was odd driving through this area as it was so dry and sparse compared to everything else we’ve seen. Two little boys decided to make friends with the ‘pastor’ believing he would give them riches… boy were they disappointed when all they got was one of Jasmine’s granola bars.

We had a great conversation with Lelia (who had the day off!! YAY!) about trees, cacti and birds.
Back into the taptap to head to Bois de Bouquet to look at how they create the iron art.

Much to our amazement this area has been changed completely, with paved walkways, garbage cans, and painted houses and fences. Can you say ‘tourist trap’? It looks very clean and modern… of course Phillip ended up wandering into an enclosed space where he heard some drumming. This meant that we inadvertently ended up in a voodoo All Saint’s Day ceremony. Luckily the high priest was very friendly and quite willing to talk to us and show us around – away from the ceremony. So we were escorted very politely but firmly out. 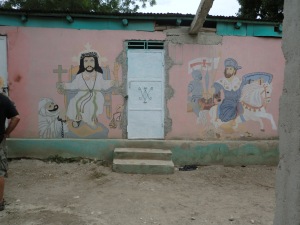 We then had asked to go see the Cimitiere (main cemetery) where the continuation of the Nuit noir (dark night, ie Hallowe’en) ceremonies meld with the All Saint’s Day festivities. Along the way we stopped and bought some sugar cane… which is kind of a messy process to eat (basically you chew on it to get all of the moisture and sugar out, and then spit out the pulp). Jasmine managed to irritate another driver, as she was dropping handfuls of pulp out of the taptap thinking it was biodegradable and so was ok. He got quite worked up about ‘the blanche’ who was littering in the street (obviously he has never actually taken a look at the street and the amount of garbage collected).
The roads to the cemetery were a little rough and so it was no surprise that when we got there it was a wild crowd. We got as close as we dared; with crowds and agitated Haitians all around we deemed it safer to retreat and leave the celebrations to the masses.
We had asked Pierre-Richard if he minded us seeing his home, and so he took us to show off his home (where his family has lived since the earthquake in 2010). The area is gorgeous with lots of trees and on a hill, and his family is lovely. The slope to get there however is gargantuan, and so it was with difficulty that the vehicle made it up. Amanda fell in love with their newly adopted kitten, and started planning the medications even while we were sitting there.

Once we left there all that remained was a quick stop at the grocery store so that we could buy water, chocolate (for the peanut butter squares that Amanda made), and baby formula (for the guy Jasmine met in the store – yes she is a sucker). Then home to finish packing and make dinner.

It’s hard to believe that our trip is almost over… we are up by 5am to make sure that we are ready by 6:30am to head to the airport for our flight home. Unfortunately the Haitian airport is somewhat less than efficient at times.
We have had trouble with both power and internet since being back in PaP, and so have not managed to put pictures into most of the blogs yet. Not to fear, this will be done ASAP.
Lots of love,
TRAJ

Each year we need to raise a minimum of $15,000 per trip to pay for interpreters, guides, in-country travel expenses, medicine and supplies. More than 90% of monies raised are spent within the country of destination for workshops and clinics.